My career as an author of books on Comedy History* began, as all the best comedy stories tend to, with Peter Cook. Although I had been a magazine journalist for half my lifetime and a Film & Television graduate who had written extensively about DVDs, films and telly programmes in numerous magazines, my fanzine career didn’t kick off until the superb originators of the Official Peter Cook Appreciation Society fagazine, ‘Publish & Bedazzled’ (Pub & Bed) asked me to send them some feedback from the mid-noughties tribute show led by David Frost. Mainly because I was the only person they knew who had shelled out £50 to be there.

This led eventually to submitting a number of articles to that periodical without peer, until the Powers That Was decided, quite precipitately in my view, that they had said all they could about the greatest humorist of the 20th century, and expanded their operation to cover the whole world of pre-Alternative Humour in the follow-up fanzine ‘Kettering – The Magazine of Elderly British Comedy’. Invited to write for that fresh title, the only un-bagsied comedy of that vintage about which I  felt passionately, badly treated by all and sundry in my view, would be ‘I’m Sorry I’ll Read That Again’, which seemed unfairly relegated to a footnote in Monty Python or Goodies history. So I wrote two articles spanning the ‘I’m Sorry’ legacy, one on the Angus Prune-led madness of ISIRTA, and another on I’m Sorry I Haven’t a Clue, which was and is of course far more popular, but had always been poorly served any time some hack decided to write about it. News articles on the Antidote to Panel Games always trampled all over the show’s numerous precious in-jokes in the most infuriating way, using shamefully incorrect terms such as ‘fictional’ in connection to the Lovely Samantha and Mornington Crescent, and generally proving that the writer did not ‘get’ the show at all. If only they had done their research… 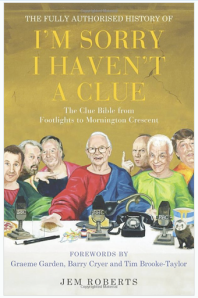 When Barry Cryer called me up to congratulate me on the fact that I hadn’t walked into any of these traps, one sentence led to another and soon it was mooted that extending my two articles into a full book would not be the most disastrous idea of all time, and eventually, with the help of Graeme Garden, the concept of an ‘I’m Sorry’ Bible (in that it was the complete guide to everything anyone could possibly ever need to know, broken up into two sections) was adopted by the official ISIHAC publisher, Trevor Dolby at Preface Publishing, and thus my first book became a reality: THE CLUE BIBLE: THE FULLY AUTHORISED HISTORY OF I’M SORRY I HAVEN’T A CLUE.

Composing it was a hell of a long and indeed winding road, involving some of the greatest moments of my life (Being in the green room at the Hammersmith Apollo, chatting to Humph minutes before the biggest ever ISIHAC show) to some of the biggest tragedies – not just the loss of Humph, mere weeks after he cordially agreed to pen the foreword, but also the great Sir David Hatch (what a loss to Comedy knowledge his early passing was), Linda Smith, Geoffrey Perkins… Ultimately, I decided to hand in the manuscript before the book could kill again.

When Preface offered me the chance to write a follow-up, despite this being a career which had taken me by surprise, the answer was immediate, passionate, and certain. Blackadder, you see, had been the real spark which started a whole life’s devotion to Comedy, one way or another. Before even reaching double figures, I was a devoted fan of the programme, but watching the tragedy of ‘Goodbyeee’ unfold at the tender age of eleven was the clincher – until then I had no idea of the true power that comedy wielded, not just to make people laugh, but… Well, you know the rest. Just as ‘The Clue Bible’ was written to ensure that no hack would knock off a point-missing cash-in, I was well aware that Blackadder had already suffered one ill treatment in print, and wanted to plant a flag ASAP before the impending 30th anniversary led someone else to rush out an ‘episode guide’ without any input from the creators themselves.

Again, the three years spent chronicling every last aspect of the creation of Blackadder were packed with honours of which I would never have dared to dream – being handed a lost** Blackadder script by Richard Curtis himself, and having it sticking out of my back pocket as I subsequently killed time exploring the Tower of London, being just one treat indelibly scribbled on my heart, for instance. Talking History with Ben Elton and Tony Robinson being another one to bemuse the grandkids about.

Writing THE TRUE HISTORY OF THE BLACK ADDER was a labour of just-on-the-good-side-of-obsessive love which was over all too soon for my liking, but it came out in October 2012, and although the myriad developments in the Blackadder camp required huge extensions for the paperback release in 2013, the time was packed with the task of writing THE FROOD – the official celebration of The Hitchhiker’s Guide To The Galaxy published by Preface in autumn 2014. The agonisation over taking on this potentially controversial duty was dwelt on at length here…

This has all been leading to the honour of being entrusted with the story of Fry & Laurie, one of our greatest comedy double acts, in my officially endorsed joint biography SOUPY TWISTS! This time, published by Unbound, so pledgers followed the construction of the positively orgasmically exciting book via the inherent link.

I use this website and blog not merely to mull over details from these books and to share comedy material – excised sections, audio interviews, things I never felt I could get away with, images we couldn’t clear for print, etc. – but to detail the development of Book #5 in the Jem Roberts range of Comedy History, and give you a chance to shout at me ‘DON’T YOU DARE FORGET ABOUT COLIN’S SANDWICH!’***

*I make no claims to any other title but ‘Comedy Historian’, as that seems to be literally the case. I do not wish to be a biographer, and one label I certainly disdain is ‘Comedy Critic’ – I will happily criticise any comedy for free, and often do, but I do not wish to make money by suggesting where other comedy writers and performers have gone right, or wrong, as if my opinion counts for anything.

**Yes, I know it wasn’t ‘lost’ – it was on Richard Curtis’ hard-drive. I believe this is a reasonable shorthand, though, for ‘something you’ve probably not seen before, okay?’