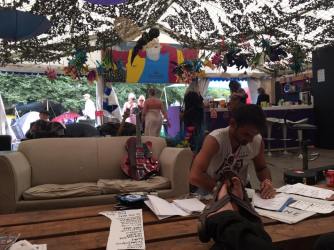 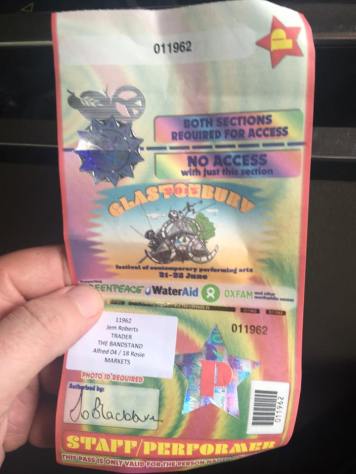 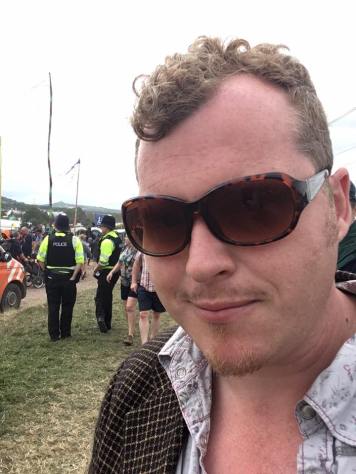 I’ve been performing comedy since the turn of the millennium, and been a solo comedy cabaret minstrel specialising in absolute filth and Tory abuse for over a decade. But as you may have guessed – and as is probably wise – I have no intention of ‘making it’ as a performer whatsoever. I don’t think it’s wank or swank to say that I’m a damn good MC and I do miss making a bit of cash from performing at burlesque and the like, but above all, what I’m interested in is the experience of a gig, and sewing badges on my performer’s uniform. Getting a gig at Glastonbury is one of the tippest-toppest performer badges I could get, and finally, this year, I managed it.

Bath has its own little enclave at Glastonbury going right back to the start of the Festival, and it’s the Bandstand. I was supposed to play it last year, but it always clashes with Ludlow Fringe, so it’s never quite happened up till now. Having bagged the gig, 2pm on Saturday 24th, and living in Bath, I was intending to make a day of it, but friends ridiculed me out of that cowardice, and with a loaned pop-up tent, I made a weekend of it instead, and am very glad I did (although my total lack of camping experience made the 3 or 4 hours’s kip I got, hanging onto a cliff-edge in a wet sock, a less than luxurious experience, must do better). I mean, I was never going to spend £250 of my own money on going to Glastonbury – I missed Macca in 2004 and Bowie in 2003, or whenever it was, so all impetus had pretty much gone. But free entry was our only payment, so I made the most of it – I saw Billy Bragg (14th time, I think), I saw Ralph McTell in the Leftfield tent, and got to shout ‘DO STREETS OF LONDON!’ at him, I saw Alison Moyet, Squeeze and Radio Active again, and got caught in the human meatloaf that filled a square half-mile when Jeremy Corbyn took to the stage, so we could hardly hear anything, and see the odd giant ear through branches, as we heaved and groaned in an immovable crowd. Proper ‘Blessed are the cheesemakers’ stuff. Besides the constant battle between horrible food and more horrible shit for attacking your nostrils at every turn, it’s an experience I wouldn’t have missed for toffee.

As for my own Tory-bashing set? WELL HERE IT IS ANYWAY, but it’s an awful recording of a wonderful hour. It’s not good enough for Soundcloud, but I will keep the Dropbox link here for a while, if folk are interested/masochistic. The Bandstand (which wasn’t the humble sideshow I presumed, but had a large and lush hospitality suite where I could charge my phone, and made it my home for days) is in the Marketplace, very near the Pyramid stage, and you have to attract passers-by. Despite Jools Holland and friends making jet engine-volume noise over the way, this I feel I managed to do quite admirably. It was a pleasure to see festival-goers strolling by, looking up, half-realising ‘Hang on, this one’s actually got some words worth listening to’ amid an ocean of far more technical talent-evidencing muzak, and then they’d stop, listen more, and laugh. Loads of people began to stop and pay attention, and even at my most annoyingly modest and glib, I can’t pretend they’re weren’t absolutely creasing themselves up at my filth. So, although this recording gives only the barest idea of what larks my set provided, I was unusually happy that I’d struck home.

And I spent the rest of my time attempting to subliminally promote Tales Of Britain, to no avail. But maybe next year… What? 2019? Bollocks.

One thought on “I Played Bloody GLASTONBURY!”