This year has had one overwhelmingly apparent theme for me – it was the year that I all-but unwittingly became the official Douglas Adams biographer, and raider of the Adams archives. The honour of this will probably hit me a few minutes before I die. But I was far from the only person still working to fly the towel for Douglas this year – it has been a bizarrely Adamsian year from start to finish. What follows is adapted from an article written for a paper thing… 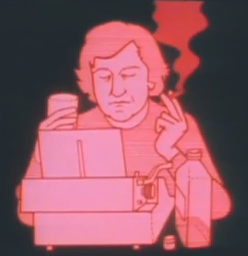 ‘Forgive me if you knew this already, perhaps I’m the last person in the world to find this out,’ Douglas Adams worried unnecessarily in one of the numerous tech columns he wrote towards the end of the last millennium, in this case on the problem of communicating via ‘palmtop’ technology: ‘the answer is this: you grip the palmtop between both hands and you type with your thumbs. Seriously. It works. It feels a bit awkward to begin with, and your hands ache a little from using unaccustomed muscles, but you get used to it surprisingly quickly.’

The rapidity with which our species has developed these muscles and now uses them unthinkingly is testament to how far ahead of the curve the avid Mac collector and gadget obsessive Douglas Adams surfed, for so long. The great humorist and thinker’s cautious discovery now seems quaint – which, along with being hopelessly over-ambitious, is one of the risks of being in the vanguard of technological philosophy. The further ahead your thinking, the bigger the margin for error, and likelihood of looking naïve in hindsight.

But as we take a look around at the techie landscape we all enjoyed, inhabited and maybe even suffered in 2014, we see a world which would have delighted and amused Adams in equal measures. The publication of a wealth of top-grade composition from the infamously painstaking author for my official celebration of Hitchhiker – The Frood – endorsed by Douglas’ family and estate, does in a way give the sadly missed philosopher and joker a fresh presence in the new century. It’s often hard not to see this brave new world from his unique perspective, which was tragically halted at the start of the millennium.

The author always diffidently batted away any claims for him as a predictive visionary: from the very start, he was a frustrated comedian turned humorist, with making people laugh generally his utmost priority, and if it suited his framework of jokes to have his hero carrying around a compact electronic book connected to an information source known as ‘Sub-Etha’, boasting all the knowledge in the Galaxy, that was just, in every sense, a device. That this Guide rather neatly presages actual devices which are now stuffed into nearly everyone’s pockets in real life is just one of an endless stream of coincidences that daisychain Adams’ career. In the 1984 novel So Long and Thanks For All The Fish, the Hitchhiker’s Guide’s froodiest field researcher Ford Prefect visits the violent metropolis of Han Dold City, connects his copy remotely to the Sub-Etha and watches the infamous entry on Earth – ‘Mostly Harmless’ – being updated in real time, in scenes which struck most readers as cool fantasy thirty years ago, but would not raise a single eyebrow in today’s wi-fi-filled world. Technology that was sci-fi has now become humdrum.

One glance at the high street would show Adams that his beloved Apple, the company whose sleek, simple machines he had passionately adored since clapping eyes on the 128k model (released in the same year as SLATFATFish), are no longer the Rebel Elite, the underdog championed by only the most fervent computing connoiseurs, but have become the Empire, ubiquitous and triumphant. Douglas’ life ended in April 2001, just short of the launch of the iPod, but he would have ended up with drawers full of them – he was even happy to appear in promotional videos for the Apple cause. He certainly wouldn’t have had to queue up for the new iPhone 6.

Incidentally, the entertainment being enjoyed on iPhones, iPads, and i-otherwise would also be right up Adams’ alley in 2014 – if The Hitchhiker’s Guide to the Galaxy has any two cultural parents, one would be Monty Python, who have just bade the world an explosive farewell at the O2 (sans Adams’ wild mentor Graham Chapman). For a whole decade, the other major progenitor of Hitchhiker has also been impossible to escape in any entertainment arena – Russell T Davies’ rebooted Doctor Who being by common accord largely inspired by the blend of wit and wonder realised by Adams in his own time on The Show, particularly in his script for the fan favourite City of Death. As a final uncanny twist, Pink Floyd have released their last album, their first such release since The Division Bell twenty years ago – a name suggested by their number one fan, Douglas, in return for David Gilmour making a sizeable donation to a charity for Silverback Gorillas.

If Adams’ latter work in the technological world is still continuing anywhere in cyberspace, it’s at h2g2.com. As the ‘Chief Fantasist’ of dotcom company The Digital Village, Douglas posited an Earth-bound Guide that would not only cover all shades of existence, but even allow users, like field researchers, to leave reviews for cafés and such, for the benefit of other users. Wikipedia, Google Maps and many more services have taken on these ideas until they have become par for the course, and yet the h2g2.com ball Adams started rolling at the end of the last millennium is still very much a continuing project, placing itself in the same position to Wikipedia as the ‘Hitchhiker’s Guide’ was to the ‘Encyclopedia Galactica’: the snarky option, which tells it like it is – sometimes.

On a similar note, there are many sadly missing wits who would have flourished on Twitter, but it’s so hard not to reflect on how surely the incurable epigrammist Adams may well have been crowned King of the Tweets, entertaining his millions of followers when he should be honouring novel deadlines.

Despite his Dirk Gently-ish reticence to claim any clairvoyance, Douglas was to become feted by the scientific and technological communities, and was often paid to pontificate on our electronic future, but in 2014 maybe we were still a fair distance from the realisation of some of Adams’ presumptions, such as computers as tiny and numerous as grains of sand. The number 2014 provided no urgent anniversary for Hitchhiker, bar the autumn’s 35th anniversary of the first novel’s release by Pan Books. Perhaps 2013’s marking of the radio programme’s first broadcast would logically have been the most obvious celebration. Therefore it must just be yet another extraordinarily random coincidence that, besides the release of an all-new iteration of the classic Hitchhiker computer game, the deadline for The Frood was screeching towards me just as the original radio cast were brought together in the BBC Radio Theatre this March for an almost unprecedented honour – a live broadcast of a mash-up encore for Arthur Dent and cohorts, as devised and directed by Douglas’ last radio comedy collaborator, Dirk Maggs.

I could spend the rest of my life trying to think up any rational explanation for this all happening in 2014, but I give up. It may all have just been coincidence, or it could well be that Hitchhiker, even nearly fourteen years on from the loss of its creator, is still just very, very hard to put down.

As a slightly random New Year’s gift to those who are interested, here’s a couple of Photoshop offerings from my own meagre talents. I’ve always believed in squeezing as much added value into my books as possible, and particularly feel that the hardback’s endpapers should be anything but dull – an issue which triggered a highly unusual argument with my esteemed publisher, with whom I generally have an unwavering accord. Apparently it’s plain endpapers FTW in publishing circles, but I still feel fans should be given as much as possible.

Sadly, my campaign to include the Hitchhiker collage below in The Frood hardback failed miserably, largely due to clearance issues, sobeit. Nevertheless, although the quality of artwork here is quite deliberately rough as arses (the idea was that one of Preface Publishing’s designers would do a better job of it, but it never got that far, sadly), I can include it here for download. If anyone fancies brightening up the drab existing endpapers by printing out this and sticking it into their copy of The Frood… You may need a better hobby, but good luck to you.

Anyone who already has The Clue Bible in hardback will recognise this collage as it appeared – strangely, without any further design work, this is just as I designed it. So this is what paperback owners will have been so badly missing…

The top image contains elements which are kindly reproduced by the Master and Fellows of St John’s College, Cambridge and numerous ©opyrights including the excellent Kevin J Davies, DC Comics, BBC TV and what-have-you. The bottom one is mainly thanks to Tim Brooke-Taylor and Humphrey Barclay.

Sincere thanks to everyone who has bought any of my books or in any way persuaded me to keep at it this year. I hope not to let you down in 2015.

MAY YOUR 2015 BE FROODY OR OTHERWISE FORTUITOUS, ACCORDING TO TASTE!