THE FROOD – Fit The Fifth

First things first – come along to a very special BFI DOUGLAS ADAMS & HITCHHIKER’S GUIDE RETROSPECTIVE on Sunday 14th December! There shall be rare material and cosplay and Trillian and GargleBlasters and fun! More details follow… 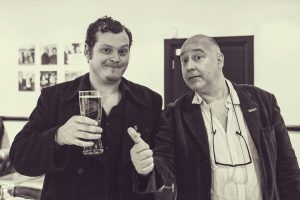 One of these froods is hoopier than the other – me and the remarkable Toby “Slarts” Longworth.
Pic taken by the excellently-monikered Janko Dragovic.

I may have gone where I intended to go, but I do not think I have ended up where I wanted to be – to subvert the words of an occasionally wise detective – which is another way of saying that the publicity splurges for The Frood brought a lot of pleasure both to me and to audiences around the middle bit of this island… However, it seems that amid the avalanche of selective-memoirs from the likes of Cleese, Merton, Fry et al, even a figure as beloved as Adams can get a bit lost. It may well be that soon it will become illegal to write a book unless you are a celebrity.

In short, it occurs to me that a massive shake-up of the way books are published is in order – even though The Frood missed ‘Super Thursday’ by coming out a week or two earlier, there’s simply no commercial sense in squeezing a year’s worth of book releases (many specifically aimed at the exact same readership) into one day in autumn any more – if indeed, there ever was any sense in it. Perhaps a new model will come along, in which books sort of stay in publicity mode for a lot longer, being updated, re-printed (if popular enough), and dusted down for suitable occasions, to help spread the word.

For instance, I tend to meet about one person a week who claims to be the biggest Blackadder fan of all time, ever, no comebacks – and almost without exception, these people never even know there is a widely available great big official-as-dammit book on the subject, packed with exclusive material. It looks like The Frood might be a similar situation, Hitchhiker fans the world over need to be told about it – but with every single media outlet in the UK currently being all-but run by unpaid interns , their Culture coverage cut down to around one sentence every second month, how to let them know? I’m currently favouring a special series of supernovae explosions on New Year’s Eve which will spell out “BUY THE FROOD BY JEM” across the firmament – keep an eye out at the end of the month to see if my plans have come to fruition.

Nonethefewer, in the meantime, after a year of chilly isolated composition on The Frood, I can at least sincerely say that the publicity splurge we did have was a genuine pleasure. First there was the honour of the top floor of Foyles’ brand-spanking new metropolitan store, debating with author Marie Phillips  about Adams’ problems with fictional females: 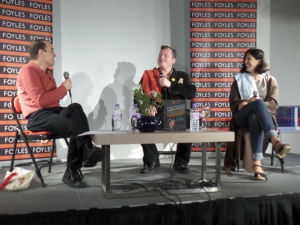 Next came the interesting challenge of improvising 90 minutes of stand-up on the subject of The Frood for Bath’s Toppings, followed by a friendly chat with the Douglas Adams expert par excellence, David Haddock, in Heffer’s Cambridge: 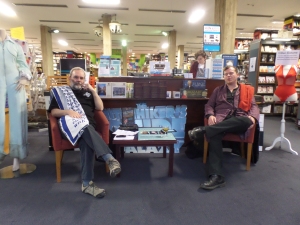 Then came the biggie – being on the Cheltenham Literary Festival main stage with Douglas’ brother James Thrift and old friends Clive Anderson and Terry Jones – a slightly smaller venue for the latter than his most recent gig at the O2, but a great pleasure for all of us. The Radio Times rather naughtily stole a non-story moment from the event without even bothering to mention the actual book, but that report is very misleading indeed – at this stage, it’s impossible to say precisely what is happening with the Adams archive…

Oh, and as an extra jolly, of course, there was the unexpected pleasure of an added date in November, at the Chortle Comedy Book Festival in Camden. I thought I would make this more of a comedy event than a book plug, and could think of nobody better to join me on stage than the current reigning Slartibartfast in the official Hitchhiker tour – Toby Longworth – to aid me in performing some ultra-rare slices of Hitchhikeriana. With an eye to the fundamental inter-connectedness of all things, you see, comedy stalwart Toby is actually from my adopted home town in Bath, and we share a number of close friends, but had never actually met up until this occasion. We each chose a favourite passage from the H2G2 legend – he plumped for Marvin’s death, I chose the initial Dent/Slarts dialogue: 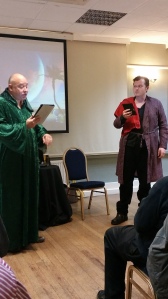 Yes, I know I’m a poor stand-in for Simon Jones… but I wouldn’t be the first! Pic ©Amanda Leon-Joyce

But we also performed some exclusive never-before-seen material – the highlight being our very ad-hoc reconstruction of the beginning of the abandoned Hitchhiker TV Series 2, with Toby standing in for David Dixon and me still failing to capture the brilliance of Simon Jones. Still, my ukulele stayed in my bag (no ‘So Long…’ singalong!) and many laughs were had – I was even stopped in the street and asked about the possibility of further fringey stagings of this Longworth/Roberts ‘show’ as it were, but that would depend totally, like everything else, on the feelings of Douglas Adams’ family and estate. I’m up for it.

So, this ‘rent horizon’ season has been packed with pleasure, then, but thankfully we’re not done yet! Somebody lovely from the BFI and the Loco Comedy Film Fest rang me up with an offer to chair a special panel on Sunday 14th December, as part of a whole day of celebration of Adams’ work, for froods of all ages! The hoopy day will be starting off with a special Dr Who slant by showing all of City of Death, filling in the middle with chats and rare programmes from us – including the original Trillian, Susan Sheridan – and culminating in a complete marathon of the BBC TV sitcom version of Hitchhiker’s Guide. Simply click the link at the top of this blog to get involved in all the fun, and let’s hope that more people continue to discover (and above all, enjoy) The Frood in the coming days, weeks, months, years…

As the most comprehensive official guide to The Guide in the known Galaxy, The Frood will always be out there now, and as long as my writing does as much justice to Douglas’ memory as people have told me it does, that’s all that really matters.

Now, will somebody please buy me lunch?