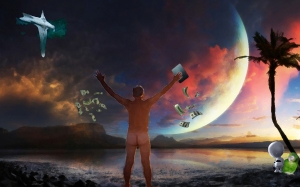 GETTING THE HANG OF THURSDAYS

15 months is a long time in publishing. It’s an excruciatingly long time in politics. And is also quite a bit of a wait in the fields of medicine, confectionary, and professional equestrianism. For me personally, it’s the time between sitting down to suggest to you the reasoning behind my all-new and utterly official guide to the life and work of Douglas Adams, THE FROOD – and actually having the book right here in my grasp, composed of actual molecules and everything.

Perhaps the worst thing an author can do on publication is to issue long lists of disclaimers and special pleading, and hopefully the previous three Fits on this blog detail the journey with enough honesty to show that this book has been created from start to finish with openness, sincerity and love for Adams and Hitchhiker paramount at every stage – this is why the Adams estate, Ed Victor, Polly Adams et al have been so supportive and made it an official part of the Douglas Adams library. Whether the finished volume makes them feel it deserves this distinction it’s still too early to say, but the love and devotion with which THE FROOD has been constructed can never be doubted, except by the most bitter bystanders.

However, when I was invited to take part in a Reddit Q&A back when the ‘Archive Hitchhiker Found’ stories were doing the rounds of UK media, Rolling Stone, and so on, it was made clear to me just how firmly and publicly my fragile spuds are being served up on a platter for Hitchhiker fans the world over to take a run up and kick. I’ve nothing against Reddit, but have never ventured on there, and didn’t feel keen to start when invited – not least as I’d already said all I could on the subject. But I was sent a link to the FROOD thread there, and could see the gangs lined up around the corner with the stuffed eelskin ready to give me a good pasting – “Who is he? Did he even know Douglas? Who does he think he is?” One thing I’m not a glutton for is punishment, and so I begged leave to skip that particular mauling. This is the place where I’m happiest to explain myself right now…

But I do understand the prejudice from fans who consider themselves in some way ‘truer’ fans of any comedy or sci-fi creation, that some apparent chancer has come along to meddle with the thing they love. It was precisely to avoid any such impotent rage from myself, indeed, that I decided to write my first book, the official I’m Sorry I Haven’t a Clue Bible – if anyone else had dared to spoil the fun of my favourite radio comedy, given away the secrets of Mornington Crescent and so on, I’d never have forgiven myself, let alone them. Nonetheless, anyone who thinks that I am jubilantly celebrating a long-held plan to become ‘The Official Douglas Adams Biographer’ should read on…

It has been an intense year and a bit, the most undiluted period of composition of my life hitherto. But in fact, let’s go back even further, to March 2012:

Me and fellow Hitchhiker-loving pals at the Hammersmith Apollo to mark Douglas’ 60th.

At this stage, I was on the verge of handing in the manuscript for THE TRUE HISTORY OF THE BLACK ADDER after three years, and nothing could have been further from my mind than actually writing about Hitchhiker in any way, I was just there as a life-long fan, enjoying the show. As far as I was concerned, Gaiman and Simpson and Webb had pretty much totalled the subject forever more, and… Hang on, sorry, I feel a sudden uncontrollable need to create doggerel:

Gaiman & Simpson & Webb,
(Plus Roberts, that come-lately pleb),
Though different in looks,
Have all written books,
That marvelled at Douglas’s neb.

The totally un-inter-connected jumble of coincidences, freak occurrences, and a plethora of d’you-mind-if-I-don’ts which have taken me from that state of innocence, to this current situation, marvelling at a first edition hardback with an unusually low level of teething glitches*, thanks to the sharp-eyed folk at Preface: 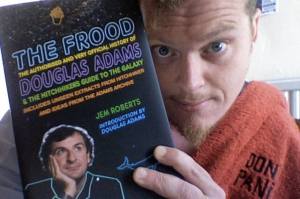 Remember, at no stage have I claimed not to be a tosser. And that beard’s looking a bit Dirk Maggs (not deliberate, I promise, Dirk, yours is much better). But I hope I can be a bit proud… Of the book, not the beard.

… Reading this blog should make clear that all these steps on ‘The Road To THE FROOD’ bely any suggestion that I am a hardcore ZZ9-er who plotted to rise to the top of the Hitchhiker fandom heap. My requirements for devoting myself to a project remain the same: That the subject matter is already automatically a passion of mine, and that the story deserves either telling, or in this case, retelling, in a refreshing way. It was hardly an entirely sunlit experience, months of winter frozen to my desk psychologically stuck on the depressing musings of a miserable robot in a cold and bureaucratic universe… but Adams’ facetious, silly, philosophical humanist humour kept me going, and I have come out the other side loving the man and his work more than ever before. This was always my main hope, and why I have to genuinely adore my subject matter, so this process can intensify that love, not diminish it.

The discovery of reams of unpublished material from the Adams Archive has of course both upped THE FROOD’s USP a hundredfold, and given other fans some room for caution. But anyone who feels there’s the slightest tang of cash-in involved here, that we are capitalising on work Douglas did not want shared with the public, really should avoid panic. The material used in THE FROOD is, I would estimate, about one tenth (just the most polished, funny, insightful, and/or pertinent extracts) of the publishable material I uncovered in my researches – and the ‘publishable material’ constituted about a third of all the writing in the Archive. This isn’t like John Lennon’s letters, we’re not printing shopping lists here, we could have included several times’ this amount of ‘lost’ Hitchhiker material without getting within scraping distance of any barrels, or in any way compromising the genius of Douglas Adams. I saw plenty of stuff not fit for publishing, and we chose only the best of the prose that was worthy of the public’s gaze – albeit there’s so much more hidden away…

Now comes the traditional worst bit of being an author: actually getting people likely to buy the book to know all about it, and part with some currency for it. In fact, it’s inspired me to define a new term, familiar to me by now: THE RENT HORIZON. The Rent Horizon is the point at which a project conceived and created entirely from love finally has to actually provide some form of income. I’ve written a piece on Comedy Archives for The Independent, there’s something going in The Times, and above all, where my previous book was launched with a quiet dinner for three at Pizza Hut and later, a modest rainy afternoon at the Penarth Book Festival (who were utterly lovely, should you be reading this! Do have me back), THE FROOD has a comparable media blitz lined up. Well, when you’re taking on the might of Stephen Fry, John Cleese, Michael Palin, Danny Baker and Paul Merton all at once, it’s best to make something of a song and dance about it.

So anyone keen to know more about this new guide to the Guide has numerous chances to see me pontificate in person:

• First at Foyles in London on the 23rd…

• Then back home at Toppings in Bath on the 24th…

• Next day, back over to Heffer’s in Cambridge on the official launch day, 25th September…

• And then, the really scary one, Saturday 4th October THE FROOD takes the lunchtime limelight at this year’s Cheltenham Literary Festival…

• Plus, just added, is this evening at Rossiter Books in Ross-On-Wye on October 24th.

With reference to the big Cheltenham event, being the author, of course I was naturally the last one to know, but I discovered from a random post on the ZZ9 Facebook page that the Cheltenham event will involve me (with Ed Victor and Douglas’ brother James Thrift), being quizzed on stage by none other than Clive Anderson, 20 years on from devotedly watching his chat show every Friday night (I promise not to do a Bee-Gees). As if that wasn’t treat enough, extracts from my book and Hitchhiker lore in general will be read by a real living Python – Terry Jones. So if you’ve ever wanted to see what I look like paralysed with fear, it’ll cost you about £12.

With The Rent Horizon passed, of course I hope Hitchhiker fans buy THE FROOD, but it is genuinely most important of all that they ENJOY it. And indeed, SHARE it with other fans, whether I get a penny or not. I set out to make a book worthy of association with the all-time King of Sci-Fi Comedy, and I hope you all feel it’s been worth my effort, the effort of all of the team at Preface Publishing, and indeed, the effort of Douglas’ friends and family who felt I had it in me to provide the icing on the cake originally baked by Gaiman & Simpson & Webb. I know that the experience has deepened my fandom for Douglas and the Galaxy he created, and I only want it to do the same for Froods everywhere.

*Hardly anything, comparatively: one rogue cloned book cover in the second plate section, the insane phrase ‘Betamax VHS’ when it should obviously have been ‘Betamax VCR’, and of course I meant ASTRONOMY not astro-bloody-logy… Howl… Still, for a 150,000+ word book, this is quite a remarkable strike rate, and all creases are being immediately ironed out… We apologise for the inconvenience.

2 thoughts on “THE FROOD: Fit The Fourth”